Hello, my name is Angela! 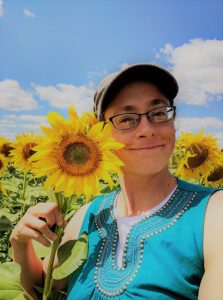 I grew up in the mountains of Central Pennsylvania as the oldest of four children on a small farm where my Dad raised pigs in a farrow-feeder operation. As a kid, I really enjoyed being outside, sports, and reading. As I got older, I developed an interest in science and figured I’d end up being an inventor or engineer. However, the human genome project and genetic engineering developing in the late 90’s captured my interest, and a science teacher encouraged me to read and study the subject more in-depth. As the end of high school approached, I decided that would become a genetic engineer of plants, feed the world and help people.

At the same time, my knowledge of God and desire to follow Him was deepening. My family was from a Mennonite background, and I had grown up in the church. My parents were very honest and open about life and how being a Christian worked out day-to-day. I saw their commitment and believed that God was real, that He was worth seeking and following. So I was baptized at age 10 and began studying the Bible for myself.

Upon entering college, I was gung-ho to learn as much as I could about plant science (my major) and to grow in my faith. I joined Campus Crusade for Christ, and was challenged by the sincerity of the older Christian students there. School was hard, but interesting. I attended Cornell University, where plant genetic engineering was cutting-edge and has more classes on plants than I could possibly fit into four years. At the end, I had learned lots about plants and soil and chemistry and Jesus.

I figured that I should head right into the mission field—God couldn’t disagree with that, right? However, through prayer and seeking the counsel of other Christians, I felt that God was asking me to first work to pay off any loans I had. That took 8 years. During those years, God challenged me many, many, times to surrender my timeline for “getting to the mission field” and work in His vineyard at His timing.

In 2010, I joined a small ag company in New Holland, PA, led by Les Yoder and Don Weaver. Les had begun traveling to Moldova with some other ag professionals and farmers, and at one point I was asked to come along to help with the agricultural seminars that they conducted. I loved the country and the people, and was excited to visit again in 2015 with Les and a pig farmer, Jim Ranck. During and after that visit, I sensed that God was opening to a door to go to work in Moldova. In His timing, He had prepared me in many ways, leading up to my arrival in here in Moldova in January 2016. I can honestly say that my work here is the most fulfilling I’ve ever had. I live in a small village, visit farmers around the country, and try to serve them as best I can with disease and insect diagnosis, fertilizer recommendations and educational materials. I am part of a small Baptist church here and also work with the youth group, sing in the choir, and make the rounds of Grandmas wanting to feed me 😊. There is much work to be done, but we trust that God is at the helm and leading even our small efforts. May He be glorified!

All His best,
Angela